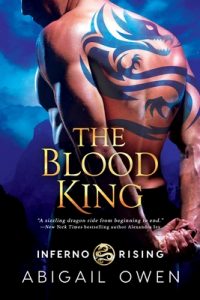 Ruthless dragon king Ladon Ormarr must keep his throne at all costs. And now, with war on the horizon, he’ll need a miracle. Luckily, the fates have dropped Skylar Amon right into his lap.

Except he may have met his match.

The feisty Amon sister has no fear — of him or any other dragon shifter — is brash, doesn’t stick to protocols, and regularly offends his warriors and advisers.

Skylar also has no intention of sticking around. She doesn’t believe in the whole destined mates thing and believes all dragon kings to be dangerous. But if it means taking out the High King who murdered her parents, she’ll put up with Ladon… temporarily.

But the fates have other plans. And when Skylar disappears in the middle of a battle, Ladon will burn down the world to find her.

I truly enjoy this series. I was lucky enough to get an advanced reading copy of the first in the series and then was offered the chance to read the second. I was so excited to go back into the world of dragon shifters and phoenixes. I was not disappointed.

Ladon Ormarr I had to say was a bit of an asshole alpha to start, but I think that’s what Owen was going for when she wrote him. He was rough around the edges, for good reason, but I wasn’t so sure that Skylar deserved what he dished out. I didn’t even like how it felt that their mating was a bit rushed. I was afraid that there would be no time to develop the relationship that I wanted to happen between them. However, the non-stop action was an aid in making their story stand out. The connection they were able to develop was well done and the steamy scenes were, well steamy. I wasn’t disappointed. Not one bit.

I wasn’t really one to read shifter romances until Abigail Owen helped me see that I had to find the right one. This book is definitely one you have to read if you are a lover of shifter romances. Also, in my opinion, you would have to read the first one to really get a grasp of what’s happening. There are references from the previous book and information that I think it absolutely important to read the second. You will instantly fall in love with these heroes and heroines.