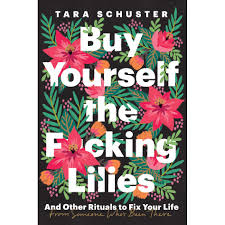 What is this book about? (From Goodreads) – “By the time she was in her late twenties, Tara Schuster was a sought-after TV executive who had worked with Jon Stewart and launched Key & Peele to viral superstardom. By all appearances, she had mastered being a grown-up. But beneath that veneer of success, she was a chronically anxious, self-medicating mess. No one knew that her road to adulthood had been paved with depression, anxiety, and shame, owing in large part to her minimally parented upbringing. She realized she’d hit rock bottom when she drunk-dialed her therapist pleading for help.

Buy Yourself the F*cking Lilies is the story of Tara’s path to re-parenting herself and becoming a “ninja of self-love.” This is the book Tara wished someone had given her and it is the book many of us desperately need: a candid, funny, practical guide to growing up and learning to love yourself in a non-throw-up-in-your-mouth-it’s-so-cheesy way.”

Review: – This book fits into two current categories in the non-fiction/self help realm.  One, there are at least ten books, currently in book stores, with the F word in the title.  Anyone who knows me knows that I am from New Jersey, and I have the potty mouth to prove it, but honestly I’m kind of over this “shock me with the vulgarity” trend in self help. There is also a trend of comedians writing books.  For example, Tina Fey wrote a best selling book about her rise to fame.  Amy Poehler wrote an almost identical book, but did it way better than Tina Fey.  Now we have Tara Schuster, Vice President of Talent and Development at Comedy Central, who wrote a book that is not as good as either of the aforementioned books.

I see where Tara was going with this book.  Take time to smell the roses, prioritize self love, listen to your intuition… but honestly, most of her advice only suits a single woman with an abundance of time and money.  As a wife, mother, and business owner,  most of her advice would be impossible for me to follow unless I want to prioritize journal writing over keeping my children alive.  Also, as someone who uses Medical Marijuana to manage PTSD, I hated her chapter on giving up weed and replacing it with running with the fire of one thousand suns.

As a Women’s Health Therapist (my day job), I am proud of Tara for figuring out her path to happiness after a traumatic childhood.  I just think this book could have been written as more of a non-fiction story of her journey, rather than a step by step “must do to be healthy” self help book.   Although the book is full of some very useful tips and tricks to improving mental and physical well-being, it comes off as a bit pious and holier than thou, which is off putting.