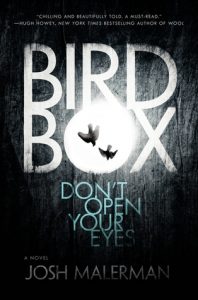 Something is out there, something terrifying that must not be seen. One glimpse of it, and a person is driven to deadly violence. No one knows what it is or where it came from.

Five years after it began, a handful of scattered survivors remains, including Malorie and her two young children. Living in an abandoned house near the river, she has dreamed of fleeing to a place where they might be safe. Now that the boy and girl are four, it’s time to go, but the journey ahead will be terrifying: twenty miles downriver in a rowboat—blindfolded—with nothing to rely on but her wits and the children’s trained ears. One wrong choice and they will die. Something is following them all the while, but is it man, animal, or monster?

Interweaving past and present, Bird Box is a snapshot of a world unraveled that will have you racing to the final page.

This is a rare occasion. I actually watched the movie on Netflix before I read the book. I had done a little research and knew that the book had difference from the film. I can honestly say that both the movie and the book have differences but in those differences they thrive.

There is a certain darkness that comes in this book. It is violent in some ways and the tension that is able to be built into the story is terrifying. As a parent, I think this book is absolutely horrifying. What would you do for your children or to your children if there was something like this attacking people? I put myself into situations as i read, which probably wasn’t a good idea because it scared me more.

I was afraid that the children would just be objects but in so many ways I felt for them. I related and I kept hoping nothing would happen to them. They had to adapt to their surroundings, having been born in a world where you couldn’t go outside or see anything.

Bird Box in my mind is more than a scary book. It is a social experiment. It is a story of survival. Definitely a book I would read again and I would share with everyone.