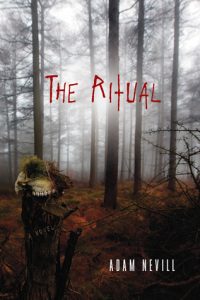 When four old University friends set off into the Scandinavian wilderness of the Arctic Circle, they aim to briefly escape the problems of their lives and reconnect with one another. But when Luke, the only man still single and living a precarious existence, finds he has little left in common with his well-heeled friends, tensions rise. With limited experience between them, a shortcut meant to ease their hike turns into a nightmare scenario that could cost them their lives. Lost, hungry, and surrounded by forest untouched for millennia, Luke figures things couldn’t possibly get any worse. But then they stumble across an old habitation. Ancient artefacts decorate the walls and there are bones scattered upon the dry floors. The residue of old rites and pagan sacrifice for something that still exists in the forest. Something responsible for the bestial presence that follows their every step. As the four friends stagger in the direction of salvation, they learn that death doesn’t come easy among these ancient trees . .

One day while talking with one of my best friends about movies or books that terrified us recently, my friend brought up seeing The Ritual on Netflix. I had not seen the movie but she said it was one of the most terrifying things she had seen. She said that there was a scene in the film that had stuck with her even now. I watched the trailer and was of course disturbed. There were flashes of images that had me going, what the heck?! I did further research and found out it was indeed a book first. So I decided that I should read the book and then decide if I wanted to watch the film.

There were many times as I read this book that I had to put it down. I considered the freezer (like Joey from Friends) but decided simply putting it in a drawer for awhile would be ok. There were a lot of intense moments in the forest where they were having a nightmare or vision that had me taking deep breaths. I will warn anyone who reads this book that there is a LOT of blood. There are dead animals hanging from trees, there are humans being cut open, and there are skeletons everywhere. The forest is just a graveyard of despair, sacrifice, and terror. It makes me never want to go backpacking in the woods ever.

I loved how Nevill took the time to write Luke’s point of view and what was going on around him. The forest was as much of a character as the people. You never knew what was going to happen or where tragedy would strike. This is an intense book and one that you would give you chills.