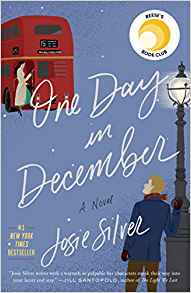 Laurie is pretty sure love at first sight doesn’t exist anywhere but the movies. But then, through a misted-up bus window one snowy December day, she sees a man who she knows instantly is the one. Their eyes meet, there’s a moment of pure magic… and then her bus drives away.

Certain they’re fated to find each other again, Laurie spends a year scanning every bus stop and cafe in London for him. But she doesn’t find him, not when it matters anyway. Instead they “reunite” at a Christmas party, when her best friend Sarah giddily introduces her new boyfriend to Laurie. It’s Jack, the man from the bus. It would be.

What follows for Laurie, Sarah and Jack is ten years of friendship, heartbreak, missed opportunities, roads not taken, and destinies reconsidered. One Day in December is a joyous, heartwarming and immensely moving love story to escape into and a reminder that fate takes inexplicable turns along the route to happiness.”

Review:  This book was a nice, lighthearted, break in my book rotation.  Silver does a great job with character development which makes it easy to root for all three members of the love triangle simultaneously.  I did feel that parts of the story dragged on for awhile, and the “I love him but can’t have him” opening phase of the book was painfully long.  We get it, she’s torn, it sucks, move on.  However, about halfway through the book, it took some very unexpected turns which drew me back into the story again.  The story spans almost a decade, which makes you feel very invested in the characters, and you get to see them at their best and at their worst.  For a book with a predictable outline, I was very pleasantly surprised with the unexpected twists and turns in the second half of the book. Overall, this is a classic Christmas tale of friendship, travel, marriage, grief, babies and love at first sight.  I recommend you read it on a cold day with a big mug of spiked hot chocolate.