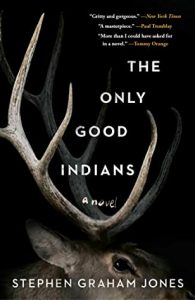 A tale of revenge, cultural identity, and the cost of breaking from tradition in this latest novel from the Jordan Peele of horror literature, Stephen Graham Jones.

Seamlessly blending classic horror and a dramatic narrative with sharp social commentary, The Only Good Indians follows four American Indian men after a disturbing event from their youth puts them in a desperate struggle for their lives. Tracked by an entity bent on revenge, these childhood friends are helpless as the culture and traditions they left behind catch up to them in a violent, vengeful way.

I want to thank Netgalley for giving me a copy of this one to read. THANK YOU NETGALLEY!!

This book scared me and by scared I mean completely terrified me. The images that still haunt me have made it so I will never look at elk the same.

This is a very intense revenge story wrapped in myths and nature. We follow four Native American men and their journey after committing an evil act against nature and rez rules. It isn’t pretty. I definitely think if you can’t handle blood and gore and violence, this book is not for you. There were scenes where I just had to take a step back. The book plays with your mind and you never know when something is going to happen. You just know that characters are going to die, so you don’t want to get attached to them.

The book played like a movie in my mind. The dialogue was well written and the scenes were laid out in such a way that they spread out before your eyes.

It did take me a bit to get used to the writing style but once I was in the groove, I was in it.

This book is definitely for those who want a scare. It’s dark and bloody. If that is your jam, pick this one up.