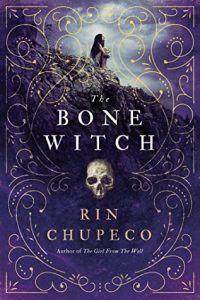 What’s the Story: (from Goodreads):

In the captivating start to a new, darkly lyrical fantasy series, Tea can raise the dead, but resurrection comes at a price. When Tea accidentally resurrects her brother from the dead, she learns she is different from the other witches in her family. Her gift for necromancy means that she’s a bone witch, a title that makes her feared and ostracized by her community. But Tea finds solace and guidance with an older, wiser bone witch, who takes Tea and her brother to another land for training. In her new home, Tea puts all her energy into becoming an asha-one who can wield elemental magic. But dark forces are approaching quickly, and in the face of danger, Tea will have to overcome her obstacles and make a powerful choice.

Why had I never really looked into this book before? Why did I sleep on it? This book was so well written and the story was so rich. I loved the world and the characters. There were so many twists and turns and this was only the first book in the series.

There were a lot of reviews that said that the first half of the book was really slow. I would agree with that but I would not DNF this book. The first half is really the world and character building that will lead you to the last half of the book. The last half is where all the action takes place and it sets you up for the parts to come. I really had no idea where the book was going at first and the daily tasks that we read about that Tea has to complete can be tedious. I agree. But in that time we also get to see relationships and alliances being built between characters.

I did not like Tea at first. I found her to not be as complex as I expected, but I think Chupeco wrote her that way so we can grow with her. She has to be trained and refined. I see a great maturity that comes with the time she spends with the other asha. I also see how her brother comes into his own and yes, the love of her life.

This book is dark. I was taken aback at first by how dark it could get. It felt downright hopeless at times, but I think it leaves room for the light to come through and I love that all the more.

If you want a fantasy that makes you think of spooky, fall. I think this is the one for you.