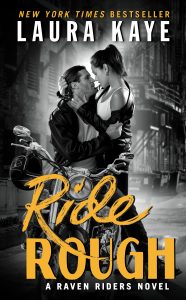 Maverick Rylan won’t apologize for who he is—the Raven Riders Motorcycle Club Vice-President, a sought-after custom bike builder, and a man dedicated to protecting those he loves. So when he learns that the only woman who has ever held his heart is in trouble, he’ll move heaven and earth to save her.
Alexa Harmon thought she had it all—the security of a good job, a beautiful home, and a powerful, charming fiancé who offered the life she never had growing up. But when her dream quickly turns into a nightmare, Alexa realizes she’s fallen for a façade she can’t escape—until sexy, dangerous Maverick offers her a way out.

Forced together to keep Alexa safe, their powerful attraction reignites and Maverick determines to do whatever it takes to earn a second chance—one Alexa is tempted to give. But her ex-fiancé isn’t going to let her go without a fight, one that will threaten everything they both hold dear.

Favorite Words: “And no one made it through life without losing a few pieces of themselves along the way, did they?”

What I truly love about the Raven Riders is that they want to help anyone who has been put in danger. Women and children are usually who they help the most. In the first book, Haven was being abused by her father and in this book, Alexa is being physically abused by her fiancé, who is not as he seems. Laura does a really great job with describing these fragile situations. I really wanted Alexa to fight back and conquer this horrible man.

Maverick, who was her best friend, past lover, and a Raven Rider, is probably one of my favorite guys thus far. He has a sense of humor but also a true sense of honor and loyalty for his woman. He wants to keep her safe but understands too that she is her own woman with her own set of hopes and dreams. Also, can I just mention how adorable it is that he loves her hairless cat?! I kept going “awww” every time he did something cute with Lucy.

I read this book in a matter of a few days. It flowed really well and kept my attention. The story was so good I wanted to see if the fiancé was going to get what was coming to him. Also, I wanted to see a “happily ever after” ending with Alexa and Maverick because the sex scenes in this book are HOT. Really, really HOT.