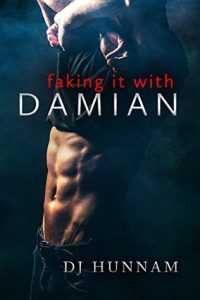 What’s the Story- From Goodreads:

I don’t do relationships…especially not with egotistical jerks like my new boss, Damian Wood. The man is vile, arrogant, condescending… and scorching hot. If he weren’t my boss and a grade-A a*&hole, I would turn on my world-famous charm and seduce the pants right off the man. But giving in to his undeniable allure might just cost me my job. Or worse yet, my heart.

I’m a prick…and Janice Holder’s new boss. Which means I should stay away, but I’ve never claimed to be a nice guy. If I don’t get my twisted fascination under control, it will only be a matter of time before I bend her over my desk and screw her. Hard. The way I’ve imagined no fewer than a thousand times since we met. I’m playing with fire and neither of us can afford to get burned, but landing in hot water might just be worth the risk.

Favorite Words: “No wonder you’re so huge, your ego needs a vessel the size of a tanker trunk to contain it.”

I felt like this book bordered on sexual harassment and sexiness. There were times I cringed because of how dominating Damian could be. He is the complete alpha male, but sometimes I just didn’t know if he was coming on too strong or not. Janice had a lot on her plate and I thought sometimes with all the emotions coming from her situation that he could easily take advantage of her.

That being said, I do think that once I started getting a better look into the world of Damian that I understood why he was trying to control so much.

The topic of death and grieving was touched upon in this book. Everyone has their own way of coping and I think that’s an important thing to emphasize, especially in a romance. To me, the characters feel like real people. They have real emotion.
Damian and Janice have so much more than an office romance. That’s why I really think that people should get to know them. This book doesn’t disappoint.

3 Replies to “Book Review: Faking it with Damian by D.J. Hunnam”