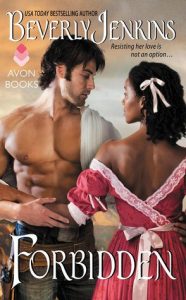 What’s the story: (from Goodreads)

Rhine Fontaine is building the successful life he’s always dreamed of—one that depends upon him passing for White. But for the first time in years, he wishes he could step out from behind the façade. The reason: Eddy Carmichael, the young woman he rescued in the desert. Outspoken, defiant, and beautiful, Eddy tempts Rhine in ways that could cost him everything . . . and the price seems worth paying.

Eddy owes her life to Rhine, but she won’t risk her heart for him. As soon as she’s saved enough money from her cooking, she’ll leave this Nevada town and move to California. No matter how handsome he is, no matter how fiery the heat between them, Rhine will never be hers. Giving in for just one night might quench this longing. Or it might ignite an affair as reckless and irresistible as it is forbidden . . .

I could be behind when it comes to certain books. This one had been on my to read list for awhile now. I do not know why I waited so long. It was SO GOOD. I could not put it down. The banter was perfect between Eddy and Rhine. I found myself grinning throughout their conversations together.

What I also enjoyed was the time that Jenkins put into the research. The setting of the book was an actual place that was found and dug up to find artifacts. That is right archaeologists found a town out west that was buried beneath dust.

Jenkins gave us a world that we could sink our teeth into and characters that we wanted to know. I did not know where the story would go. There was so much that was going on and much like the time we are in now, black lives matter. They did all the way back in the time Jenkins was writing about, and now. I felt that some of the topics that she touched upon were relevant.

This is more than a romance novel. It is a book about humans and race. Pick this one up. It is a good way to travel back in time but also to learn something. Also get ready for some STEAM.