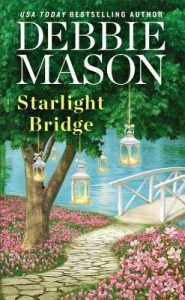 What’s the story: (from Goodreads)

A second chance for romance…

Hidden in Graystone Manor is a book containing all the dark secrets of Harmony Harbor, and Ava DiRossi is determined to find it. No one-especially not her ex-husband, Griffin Gallagher-can ever discover what really tore her life apart all those years ago. With Griffin back in town, it’s more important than ever that she find the book before someone else does. Because her ex is still angry with her for leaving him. And he still has no idea Ava never stopped loving him…

Ava is no longer the vibrant, happy woman Griffin had once loved and married, and he would do anything to bring back the sparkle to her brilliant green eyes. But what’s never changed are the sexy sparks of attraction between Ava and Griffin, and he won’t give her up again without a fight. He knows there’s the real possibility of a future together… if the truth doesn’t burn the bridge between them forever.

There is a sweet heat to this second chance romance. I really loved that there was an established relationship between the two main characters. Ava and Griffin had a hard start to their marriage with all the trauma, but their best friendship held strong. Even if they wanted to fight their natural chemistry, it was clear they were meant to be together.

The dynamic between Ava and her father and Griffin and Ava’s father was at times very draining. It felt very raw and real. It added to the story and I thought it was one of the more unique conflicts I have read in a romance lately. It felt like something that could very well happen in real life. Sometimes I think writers make a conflict that does not feel very believable or one that even fits with the story and the characters.

There is also a supernatural component to this book that I was not expecting. It felt strange at first, I’m going to be honest, but as the story progressed it got better. I began to see that the ghost was meant to give us more info on the situation. Did Mason really need to use this? No. The ghost did not need to be there but I think it was fun.

I found myself rooting for Griffin and Ava the whole time. There was no time that I did not want them to be together. I think this is a sweet summer read that we all need right now.