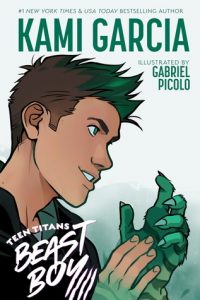 Garfield Logan has spent his entire life being overlooked. Even in a small town like Eden, Georgia, the 17-year-old with green streaks in his hair can’t find a way to stand out–and the clock is ticking. Senior year is almost over. If Gar doesn’t find a way to impress the Chosen Ones–the social elite at Bull Creek High School–he will never know what it’s like to matter. Gar’s best friends, Stella and Tank, don’t understand why he cares what other people think. They miss their funny, pizza-loving, video game-obsessed best friend.

Then Gar accepts a wild dare out of the blue. It impresses the Chosen Ones and his social status soars. But other things are changing, too. Gar grows six inches overnight. His voice drops and, suddenly, he’s stronger and faster. He’s finally getting everything he wanted, but his newfound popularity comes at a price. Gar has to work harder to impress his new friends. The dares keep getting bigger and the stakes keep getting higher.

When Gar realizes the extent of his physical changes, he has to dig deep and face the truth about himself–and the people who truly matter–before his life spirals out of control.

I want to thank firstly, DC Entertainment for sending me an advanced reading copy of this title. I was EXTREMELY excited to be able to review this graphic novel. I read Teen Titans: Raven and loved it. I knew that I would have to get my hands on the Beast Boy story if I could.

I truly loved the art by Gabriel Picolo. There is a youthfulness to Beast Boy that Picolo was able to capture and the story was fast paced. I mean Beast Boy has to be able to transition from animal to human seamlessly. It was captured perfectly.

The story being fast paced I did feel like there were a few things that were rushed. I think the story was good but it wasn’t my favorite. I felt like the Raven story was more developed and I felt more for Raven. Maybe too I just enjoy Raven more as a character in general, I mean she is my favorite Teen Titan after all. I just wish that maybe the graphic novel had a stronger story. I think it would give a better understanding of who Garfield is before he became Beast Boy. There was a rush to his powers and I didn’t like that his parents were just shown as a bit of the enemy, that they were just keeping something from him when they were trying to protect him. Teens are meant to be angsty but I think we needed more in that story development. Did he have a good relationship with his parents before?

The next book in the series is Beast Boy and Raven, so I am excited to see where the story is going to go when those two forces collide.