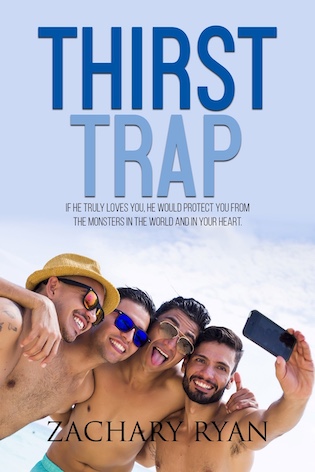 Tragedy comes in all forms, and you never know how you’ll deal with it. Four friends have all dealt with their fair share of struggles. Dillion, an aspiring writer with writers block because of his brothers sudden death, Jesse the emotional stunted drink thanks to his boyfriend’s suicide, Ivan the abused victim just looking for a place to call home, and Leo the stubborn romantic trying to get his friends to open up, while keeping his issues close to his chest.

With these four friends, they avoid all their elephants in the room like a death card agreement between Dillion and Jesse, Ivan completely hoping his abusive lover with change or even Leo focusing on his friends problems instead of his own. Can these four friends learn to embrace and accept their own tragedy or will they be stuck in the past?

Thirst Trap is a humorous coming of age novel dealing with sexuality, tragedy, substance abuse, and the most beautiful insane friendships.

Zachary Ryan grew up in a black-and-white box in Maryland, before moving to Chicago to start a new life. There, he found that he was accepted for his misfit status–and learned that it’s perfectly normal to spend your twenties feeling lost and confused.

After a disastrous sexual encounter, Ryan stumbled on a group of true friends, or “soul cluster,” that he connected with. Through his writing, he hopes to help other broken souls out there find comfort amid the chaos.

I admit that at first I wasn’t sure where this whole book was going to go. The characters felt like they were falling flat before my eyes. It wasn’t until halfway through the book that I felt the strength of these characters. I could feel that Zachary Ryan really cared about these characters and the story they were telling.

There are trigger warnings in this book. There are is a domestic abuse story line and also a story line that deals with suicide. So if these are sensitive topics for you, please do not read this book.

Ivan’s storyline felt very raw to me. The abuse made me so angry and I wanted to keep him from his situation. It was at times hard to read but I think that anything that deals with a topic such as this will be hard. It was done in a way that was informative but also allows you to see and feel what can happen in these sorts of relationships.

Dillion’s story felt a bit awkward at first but as Ryan dug into the real issues it got better. I also have to say that Dean is an absolute cutie and I love him.

Leo and Will gave us a taste of what it is to be married to your best friend young. There are times when we grow and change that it can be hard to manage something like a marriage. There were times when I really didn’t know what was going to happen, what was going to be the final product. I can’t say that I’m disappointed. It just took a bit, at times, too much bitching and moaning.

Jesse was the drunk of drunks, but I will say that his story was very dramatic for my taste, but it also brought to light a very serious subject. Do I agree with everything he did? No, but I think that his story fell into place with the others and all the character’s friendship and love for each other was portrayed well.

This book was well done and I would suggest it to some, but I don’t think that it’s for all readers. Also, I would definitely drink this one with more than a glass of wine.