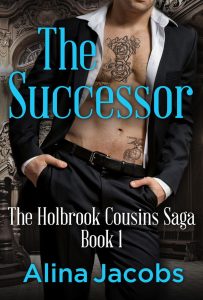 He’s gone from the battlefield to the boardroom; now this billionaire has to win his girl.

Hot tempered Grant Holbrook has just returned to the states and he’s already in trouble.

In jail and estranged from his adoptive parents, Grant thinks his luck is turning around when Kate, his birth father’s gorgeous assistant walks into the police station to bail him out.

As the newly discovered heir to a multi-billion dollar fortune, Grant is the talk of New Cardiff, his father’s exclusive New England hometown, and not everyone is happy that he’s there.

Deemed the most eligible bachelor in America, Grant has to run an international corporation and fend off the woman that want him.

But there is one woman who won’t throw herself at him—Kate.

How can he convince her that he needs her in his life not just for a night but for the rest of his life?

Sleeping with the boss’s heir is not in her job description.

Kate has sworn off men. After a string of bad relationships culminating in the absolute worst night of her life, Kate promised herself she was going to concentrate on her career and bury all of her bad decisions.

But when her billionaire boss asks her to find his long lost heir after a Holbrook family tragedy, Kate finds herself falling for the volatile Grant—but she cannot give in. She would lose her job and ruin her reputation if she were caught sleeping with her boss’s son.

Kate is the executive assistant of billionaire Walter Holbrook, and she prides herself in achieving the impossible. But when Grant starts pursuing her, he may be the one problem Kate won’t be able to solve.

As secrets from her past start to resurface, will it drive her into his arms or will she ultimately resist Grant Holbrook?

The Successor is book 1 in the Holbrook Cousins Saga, but can be read as a standalone novel. This 80,000 word steamy romance novel has no cliffhangers but a very happily ever after.

I really wanted to love The Successor but I just couldn’t fall in love. The story made sense but the characters fell flat for me. Grant held a lot of promise but he turned out to be an obsessive jerk. He came across as too egotistical. He told Kate that “she knew she wanted it” when they had a few steamy moments. It bothered me because you shouldn’t have to tell a woman you love that “you know she wants it” if she is feeling overwhelmed.

The one plot point I really liked was the professor turned stalker. It made sense to me and I thought it was well done. There were parts that were a bit too dramatic but it flowed well.

Overall, this book was just ok. It doesn’t stay with me and I don’t know if I will be continuing the rest of the series.

One Reply to “Book Review: The Successor by Alina Jacobs”