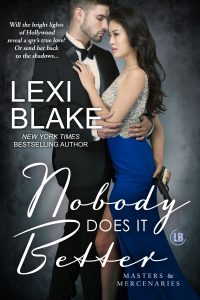 A spy who specializes in seduction

Kayla Summers was an elite CIA double agent, working inside China’s deadly MSS. Now, she works for McKay-Taggart London, but the Agency isn’t quite done with her. Spy master Ezra Fain needs her help on a mission that would send her into Hollywood’s glamorous and dangerous party scene. Intrigued by the mission and the movie star hunk she will be shadowing, she eagerly agrees. When she finds herself in his bed, she realizes she’s not only risking her life, but her heart.

A leading man who doesn’t do romance

Joshua Hunt is a legend of the silver screen. As Hollywood’s highest paid actor, he’s the man everyone wants to be, or be with, but something is missing. After being betrayed more than once, the only romance Josh believes in anymore is on the pages of his scripts. He keeps his relationships transactional, and that’s how he likes it, until he meets his new bodyguard. She was supposed to keep him safe, and satisfied when necessary, but now he’s realizing he may never be able to get enough of her.

An ending neither could have expected

Protecting Joshua started off as a mission, until it suddenly felt like her calling. When the true reason the CIA wanted her for this assignment is revealed, Kayla will have to choose between serving her country or saving the love of her life.

Lexi Blake has always been a favorite of mine. She knows how to write some hot steamy scenes, and Nobody Does it Better is no exception. They are some of the steamiest scenes I have read all year. So if you want something really sexy, this is your book.

If you want action and suspense, this is also your book. The beginning drug on a bit but once I hit the halfway point, I couldn’t stop reading. I wanted to know what happened to Kay and Josh. I NEEDED TO KNOW. There were gun battles and plenty of betrayal. There were drug lords and everything in between. I won’t spoil the plot twists but there were also some good ones and a set up for the spin-off series that I can’t wait to read.

You won’t be disappointed with this one. This book would go great with a strong dirty martini or even a nice scotch whisky.