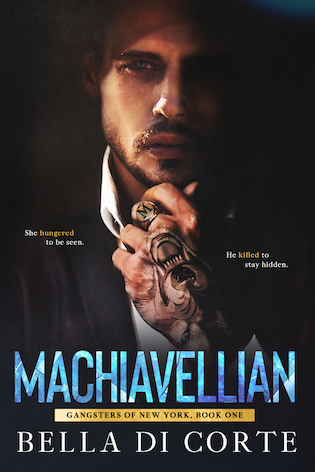 I hungered to be seen.

There were three things I knew about Capo Macchiavello:

He was gorgeous.
He was reclusive.
He was considered one of New York’s most savage animals.

And he wanted me as his wife. A simple arrangement – you do for me, I do for you. Nothing owed, no expectations. Except for one: never leave.

Life was never that simple, though. By the age of twenty-one, I was parentless, jobless, and homeless, and I had come to learn the hard way that nothing was ever free. Even kindness comes with strings.

Capo might’ve been the only man to ever see me, but I had made a vow to myself: I would never owe anyone anything. Most of all, the man I called boss.

I killed to stay hidden.

Mariposa Flores thought she owed nothing to no one, but she owed everything…to me, the ghost the world had once called The Machiavellian Prince of New York.

Machiavellian is the first of three books set in the savage world of the Gangsters of New York series.

Bella Di Corte has been writing romance for seven years, even longer if you count the stories in her head that were never written down, but she didn’t realize how much she enjoyed writing alphas until recently. Tough guys who walk the line between irredeemable and savable, and the strong women who force them to feel, inspire her to keep putting words to the page.

Apart from writing, Bella loves to spend time with her husband, daughter, and family. She also loves to read, listen to music, cook meals that were passed down to her, and take photographs. She mostly takes pictures of her family (when they let her) and her three dogs.

Bella grew up in New Orleans, a place she considers a creative playground.

She loves to connect with readers, so don’t hesitate to email her at belladicorte@gmail.com if you’d like to reach out.

I was fully invested in this mafia romance by Bella Di Corte. The story was well laid out and the intensity levels were high. It was addictive and I could not stop reading it. I needed to know what happened with Capo and Mariposa. The stakes were high and I was not sure who would survive. I was preparing myself for lots of crying, but luckily through all the pain there is a happy ending with this one.

Bella Di Corte did a great job of allowing us to experience Mariposa’s life. It was gritty and it was raw, just like Capo’s. They both struggled in their lives and it was hard reading that at times. It hits you in the guts and it’s not pretty. It did give me a clear picture of who they were as people and how they were going to support one another. The connections that are made between how Mariposa and Capo will take you a moment to grasp. I didn’t know how I felt about the twist, but with time it made more sense and I saw how they were going to grow. Character development was well done in this book.

Also, can I just say I loved Keely? The use of secondary characters was also well done. I also adored Capo’s grandfather. The whole section of the book set in Italy was pure magic. I wanted to stay in that little bubble. I think though that was the whole reason she wrote that section. She wanted us to fall in love and never want to go back to the drama. It was effective and well done.

If you are looking for drama and steamy sexy scenes, this is your book. Though, as I stated before there are trigger warnings to be aware of and with any mafia romance you will have that.

One Reply to “Book Review: Machiavellian by Bella Di Corte”