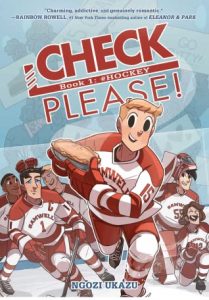 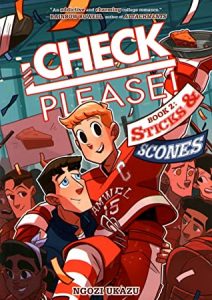 What’s the story? (from Goodreads):

Y’all… I might not be ready for this. I may be a former junior figure skating champion, vlogger extraordinaire, and very talented amateur pâtissier, but being a freshman on the Samwell University hockey team is a whole new challenge. It’s nothing like co-ed club hockey back in Georgia! First of all? There’s checking. And then, there is Jack—our very attractive but moody captain.

A collection of the first half of the mega-popular webcomic series of the same name, Check, Please!: #Hockey is the first book of a hilarious and stirring two-volume coming-of-age story about hockey, bros, and trying to find yourself during the best four years of your life.

Graphic novels have been some of my favorite reads in the past year. The more I’ve read of them, the more I go searching for more. I think there is something so appealing about having a book that not only has pictures, but a good story. It is like a picture book for adults!

I absolutely adored the story of the mens’ hockey team from Samwell University. I fell in love with Bitty, Jack, and all his teammates. Not only is the art style adorable and brings to live the team, but the story. Oh the story!

Bitty’s character was vibrant and strong, but sensitive and emotional in other ways. You couldn’t help but fall in love with him and his baking. Can I just say that I wanted to eat everything he made for the team? If he put a pie in front of me, I would devour it.

Bitty really struggled with coming out as gay to his family. He worried most about what his father would think, which is pretty relatable. It is one thing to know that you are in the closet, but another to come out to not only your family, but your team. The coming out process was something that Bitty and his boyfriend Jack both had to wrestle with and Ukauz did beautifully.

The teammates, even though they were secondary characters, felt like a true found family. I wanted to be a part of their team and have friends as funny and understanding as them. Character development was well done and I didn’t think the story was at all over the top or unrealistic.

Although I haven’t watched Yuri on Ice, I truly think that if you enjoyed that anime or you enjoy C.S. Pacat’s Fence, you will enjoy Check, Please.