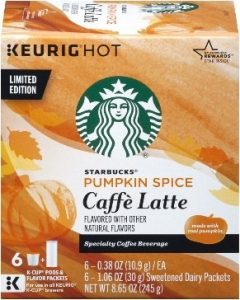 PSL! PSL! Don’t worry, I’m not pledging a new sorority called Psi Lambda, and I am aware of the jokes that could be cracked at my expense because I am posting a review about this particular product. Yes people I am a white girl and I love Pumpkin Spice Lattes. However, I did love them before it became a cliché. For the record, I happen to love pumpkin pie, pumpkin cheesecake (both with big gobs of whipped cream!), and even pumpkin beer (although it would be odd to put whipped cream on beer).

This particular review today is of the new K-Cup version of the famous Pumpkin Spice Latte. I really didn’t know what to expect from them, but I knew that this was no normal K-Cup. It comes with a pumpkin spice packet that you pour in the bottom of your mug and then brew the coffee on the top. Then you stir it a bit and ta-da: Pumpkin spice caffe latte!

The problem I found was that the packet of pumpkin spice was SO sweet, I could feel instant cavities forming on my teeth! It was to the point that I had to stop drinking because it was making my stomach turn. I had high hopes, however, what I did find that helped, and may salvage at least the spice packets in the box, is brewing it with darker coffee. I found that with a darker blend, the packet didn’t have such an intense sweetness. If you made the investment in a box, and have the same issue I found, I recommend taking this approach.