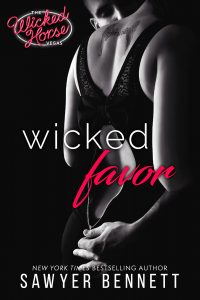 As the owner of The Wicked Horse, an elite sex club located along the Vegas Strip, Jerico Jameson never spends the night alone. Gorgeous, ripped, and totally alpha, Jerico doesn’t grant favors and will rarely give you the time of day—unless he wants you in his bed. So when the sister of his sworn enemy shows up asking for help, saying no should be easy. But when Jerico takes one look at her and sees an opportunity to help this beautiful woman while exacting revenge on her brother, he’s not about to pass that up.

Beaten and bruised, Trista Barnes is running out of options, and Jerico is her last chance to get out of the mess she’s in. She doesn’t know why Jerico despises her brother so much, but as long as he can help her, she doesn’t care. Jerico offers her safety while opening her up to a sinful world she never knew existed.

Favorite Words: “It’s my favorite room here at The Wicked Horse Vegas. It’s not where you see the kinkiest shit – that would be The Silo Room – but it is where the lust permeates the air so thickly there’s a wildness that sort of inhabits you when you join in.”

I’d never read a Sawyer Bennett book and I know this won’t be my last. I think I may go back and read The Wicked Horse series before I continue with The Wicked Horse Vegas series. That’s how good this book was, people.

I’m always intrigued with books that are based in a sex club. I feel like there is always something so sexy and mysterious about a sex club and the people that go there. You know that everyone has a story and a reason why they go somewhere they can be freed sexually.

Jerico Jameson has a good solid back story that gives us the feel of who he is and what motivates him as a hero. He’s an alpha male, and has a taste for revenge. However, what I love is that Trista’s story is not just a damsel in distress, but a woman who hasn’t explored herself enough to know what she desires sexually. So what better place than a sex club, right?

I totally would love to go and explore The Wicked Horse Vegas, if it were a real place. (Yeah I said it.) The club does help set the tone for the relationship and allows us to get to know the characters better. We can see them molding one another while they have hot sex with one another. It all starts out fun and games but as we know in romance sex never stays as just sex when there is love.

This couple is a great way to start the series. I am going to be anxiously waiting for the next installment.