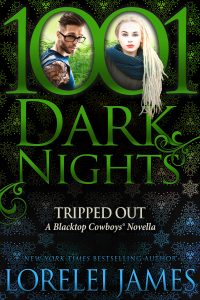 Stirling Gradsky abandoned the corporate rat race for a more laidback lifestyle. So it’s ironic she’s stuck working with a hard-bodied, know-it-all scientist who treats her like a stoner instead of a stone cold business woman capable of running a large scale cannabis operation. Dr. Hot and Tattooed with the big…brain needs to stop sampling their product; he’s under the half-baked idea that he’s the boss.

Dr. Liam Argent’s doctorate isn’t in chemistry, but from the moment he meets his sexy new coworker, there’s enough heat between them to short out all the lights in the grow house. First item on his agenda? Clearing up the sassy, blunt blonde’s hazy notion that she’s in charge.

Sparks fly as their attraction blazes. But can they weed out their differences without getting burned?

Favorite Words: “Every time he opened his mouth to speak to her, some alien took control of his brain.”

Novellas are one of my favorite things to read when I’m in the mood for something short and sweet. Tripped Out on the other hand is short and steamy.

I was not familiar with Lorelei James and her Blacktop Cowboys series, but now I will be looking it up. This novella was unique in the sense that the jobs that each of the main characters had were not the norm. They were in the cannabis industry, which is a hot topic right now. I loved it. I thought it made it fun and even lighthearted at times.

Liam and Stirling were geeky and sexy. There was chemistry and there were times I was laughing out loud. Not to mention the sex was steamy!

It’s a fast read but one you’ll enjoy and if you aren’t into weed I would suggest a nice fall beer to sip with this one.