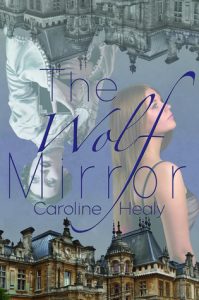 Cassie throws the first punch in a brawl at Winchester Abbey Girl’s School. Her subsequent suspension is a glitch in Cassie’s master plan; Finish School/Get Job/Leave Home (and never come back). As punishment her mother banishes her to Ludlow Park, their creepy ancestral home. In the dark of a stormy night Cassie finds herself transported to 1714, the beginning of the Georgian period.

With the help of a lady’s maid and an obnoxious gentleman, Mr Charles Stafford, Cassie must unravel the mysterious illness afflicting Lord Miller. If Lord Miller kicks the bucket the house goes to Reginald Huxley, the brainless cousin from London.

Cassie’s task is to figure out who is poisoning the Lord of Ludlow without exposing herself to the ridicule of her peers, getting herself committed to the asylum or worse, married off to the first man who will have her.

Cassie must learn to hold her tongue, keep her pride in check and reign in her rebellious nature – because the fate of her entire family, for generations, rests on her shoulders.

Meanwhile, Lady Cassandra Miller frantically searches for her smelling salts or her trusted governess Miss. Blythe, whose soothing advice she would dearly love. Instead Cassandra finds some woman and a boy squatting in the Ludlow mansion; her father, her lady’s maid and all the servants have magically disappeared.

Tell-a-vision, the In-her-net, horseless carriages and women wearing pantaloons; Cassandra is afraid that she might have inhaled fowl air causing her to temporarily lose her senses.

Only when both girls can get over their pride, societal prejudices and self-importance will they be able to return to their rightful century. Until then, they are free to wreak maximum damage on their respective centuries.

Favorite Words: “I have my duty and it is here. It was not meant to be, Cassie.”

I wanted to like this book more than I did. The premise sounded so promising but it fell a little flat. It was predictable and at times cliché. I didn’t think that Cassie and Cassandra grew enough as characters for me. I thought for sure that the time travel would show them something in themselves that wasn’t there before, but nothing happened. I think the only thing that kept me hanging on was the notion that a love story would blossom between Cassie and Mr. Stafford. However, I was also disappointed with that as well. There was no hot kissing or deep feelings. It was just a story that had great potential but never blossomed into anything spectacular.

2 Replies to “Book Review: The Wolf Mirror by Caroline Healy”