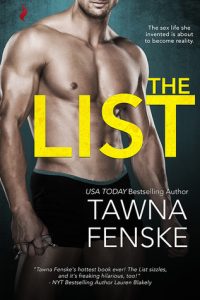 As the millionaire owner of a chain of computer shops, Simon Traxel isn’t normally hands-on with mundane repairs. But when a fretful brunette shows up with her fried laptop and killer green eyes, he makes an exception. And as it turns out, she needs more hands-on help than Simon imagined.

Brainy soil scientist Cassie Michaels has spent her whole life feeling like a grungy tree trunk beside her delicate flower sisters. To make herself more interesting, Cassie invented stories about her wild sex life—stories she’s expected to retell in vivid detail at a bachelorette party. Cassie’s attempt to catalog her biggest whoppers goes awry when she spills wine on her laptop and lands in Simon’s shop with her sexy list frozen on the screen.

But Simon’s interest is piqued, and the two strike a deal to make Cassie’s make-believe sexploits a reality. From steamy public romps gone hilariously awry, to sexy antics with kitchen utensils, their quest to conquer The List is equal parts scorching hot and adorably awkward.

As they near the end of The List though, Cassie and Simon second guess their pledge to shake hands and say goodbye when they cross off the last item. But will Simon’s big secret make that the one fantasy that can never come true?

Favorite Words: “For driving you out into the middle of the woods to have sex in the snow where my balls will get hypothermia and require amputation? Don’t mention it.”

This book was funny. The banter was hilarious and adorable. I got a sense of who Simon and Cassie were through the jokes they made to each other. It also made the book a quick read. You could get through the chapters easily and not even realize it.

Simon and Cassie were likeable, not to mention Simon was the hot nerd we all get a little crush on. They were well matched as a couple and the sex was hot, but I think at times they both were a bit childish. Sometimes I thought that the story would benefit from a deeper conversation but again that would have brought the book to an end much faster.

This is one I would recommend if you want something fun and sexy.

**Received an ARC for review**