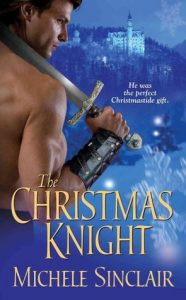 What’s the Story – From Goodreads:

Her Only Hope For The Season

With their father gone this Christmastide, Bronwyn de Breton and her two younger sisters are utterly vulnerable at unprotected Hunswick Castle. And their troubles are compounded when a fearsome knight arrives on the king’s orders to take Hunswick as his own—and the youngest de Breton daughter as his wife.

Is A Man She’s Never Met

Bronwyn would never let her little sister be forced to marry a man as rough and wild as the new lord is whispered to be. Yet someone must form an alliance with him, or all of Hunswick will be at risk. So she steps forward, pretending to be her own sister.

And A Love She Never Expected

But the new lord is not so easily fooled. He knows Bronwyn is not the woman he has promised to marry. And yet, no matter how duty-bound he may be, there is no resisting the golden-haired beauty who so fearlessly gives herself to him…and awakens a passion unlike any he’s ever known.

Favorite Words: “Everything about Queen Eleanor was feminine and pretty – but it was her eyes that gave Bronwyn pause. Shrewd, they had the ability to peel back layers of a person’s shell to reveal the truth inside.”

I liked this holiday novel a lot. It reminded me of a sexier version of Beauty and the Beast. I don’t know if that’s what Sinclair was going for but it made me think of the fairytale. What I loved was how it wasn’t love at first sight. There was a tension that grew into a passion, which for me made the couple more likeable. They were flawed in a way that made them a good team and that’s something I can dig. Don’t get me wrong, there was plenty of heat between the couple in the bedroom scenes, and it’s enough to steam up a car window. It was the perfect getaway for my holiday stresses.