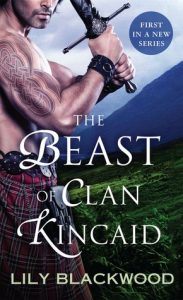 A Highland warrior battles to reclaim his birthright in the first of a new series filled with seduction, revenge, and soul-stirring passion…

They call him the Beast—a hardened mercenary whose heart seems as cold as his icy blue gaze. They do not know his true name: Niall Braewick, son of the Laird of Kincaid. It has been years since he escaped into the forest the night his father was murdered. Now he has returned, ablaze with a vengeful hunger. He will gain the MacClaren chief’s trust, gather his clan, and take back his lands. And take the MacClaren’s daughter as well…

Though he pulled her from the river, saving her life, Elspeth has been warned to keep her distance from her father’s hired warrior. He is a barbarian—a shame, as he is far more compelling than the lechers and fools competing for her dowry. Little does she know that, like the castle itself, she is a prize Niall intends to claim…but will he extract blood for blood and possess what is his, or will his enemy’s beautiful, innocent daughter tempt him to forsake his dream of conquest?

I read The Beast of Clan Kincaid and realized that it is the type of book that made me fall in love with romance. I love Scotland, highlanders, and a good slow burn. This book had it all for me. It made me stay up late into the night. I didn’t want to stop reading until I knew the whole story. I had to know what happened to Niall and Elspeth. I HAD TO KNOW.

One of the things that I loved was how every character was placed in this story with care. They helped move along the story. I knew that this book was the first in a series but I never know how an author is going to get us to the next book. Blackwood did it without a cliffhanger but with a twist that I wasn’t expecting in the end.

I wasn’t familiar with Blackwood’s books but I can tell you that I am going back for more with the second book in the series, The Rebel of Clan Kincaid.