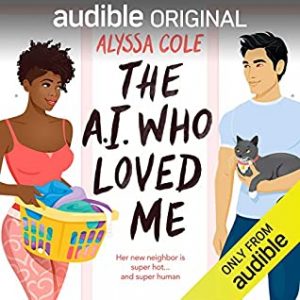 Trinity Jordan leads a quiet, normal life: working from home for the Hive, a multi-functional government research center, and recovering from the incident that sent her into a tailspin. But the life she’s trying to rebuild is plagued by mishaps when Li Wei, her neighbor’s super sexy and super strange nephew, moves in and turns things upside down. Li Wei’s behavior is downright odd—and the attraction building between them is even more so. When an emergency pulls his aunt away from the apartment complex, Trinity decides to keep an eye on him…and slowly discovers that nothing is what it seems. For one thing, Li Wei isn’t just the hot guy next door—he’s the hot A.I. next door. In fact, he’s so advanced that he blurs the line between man and machine. It’s up to Trinity to help him achieve his objective of learning to be human, but danger is mounting as they figure out whether he’s capable of the most illogical human behavior of all…falling in love.

Audiobooks were never something I thought I would try. I love the feeling of holding a book. Even ebooks are tolerable but not my favorite. There is something about flipping a page that really brings me a wave of happiness. However, this book was really intriguing to me. I had never read a romance with artificial intelligence before and I wasn’t sure that I would be completely into it.

The first thing that popped into my head was “sex robot” and I know it’s a kink, but was it a kink that I wanted to explore?

Alyssa Cole didn’t create a kinky story though and the book that I thought I was going to read, wasn’t what I ended up reading at all. This book was about what it was like to be human and what love could be described as to someone who didn’t know. Trinity had been through a lot of pain and trauma. The accident that she had weighed on her mentally and physically. The entrance of Li Wei into her life was unexpected but nevertheless adorable and at times really funny. The interactions they had when he was learning about being human had me taking a step back to think about how accurate they were.

Also, there was nothing robotic about the sexy scenes. They were done with care and there was plenty of tenderness and heat. I think as far as I was concerned Li Wei was already human. He always had been.

There were twists and turns and in the end you felt happy with how it all turned out. I would definitely not mind if Cole explored more int this world.

I think what made this more than just the story was the voice acting. I don’t think I would have enjoyed just reading this story. I loved how I could hear both Li Wei and Trinity telling their stories with their separate chapters. There was something beautiful about hearing their voices and being able to pick up on emotional cues. I think if all audiobooks are like this I may become a believer. I may dive into another one because I can’t turn down a good story.