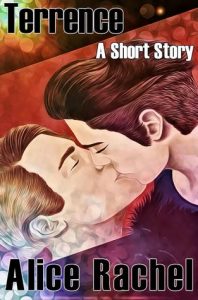 Bullying is nothing new to Terrence Young. The teasing and harassment are constant. His family is less than understanding as well. To them, Terrence chose to be gay and complicate their lives. Their little rejections sting and cut him deeply.

But when the Deviance Act is passed, Terrence’s life takes a turn for the worse overnight. Under the new law, a mere look, a simple touch, or a small kiss in public could mean death. Terrence attempts to hide his orientation to survive. That is until a gang attacks him in a bar and Chase Martinez interferes.

Chase is gorgeous, kind-hearted, and he’s a rebel in the Underground—all qualities that attract Terrence so much there is no stopping the fall. Loving Chase might be dangerous, but Terrence is done living in fear and letting others dictate what is right for him.

*The author pledges to donate 100% of sales revenue from “Terrence: A Short Story” to The Ally Coalition

This is my first time reading anything from the LGBTQ genre and it won’t be my last. This story in particular was in a dystopian world where being gay is completely illegal and you can be killed on the spot. It made reading this story about a gay young man much more terrifying.

What I loved about this short story was that it felt real. The emotions and the events that happened felt like something that could happen in real life. I loved the relationship between Terrence and Chase. There was some kissing but there was more emphasis on the actual relationship than anything else. I liked that because in this world simply holding hands could get you in some serious trouble.

This story kept my attention the whole way through and I really want to know more about these characters. The end left me wanting to know what happened.

One Reply to “Book Review: Terrence by Alice Rachel”