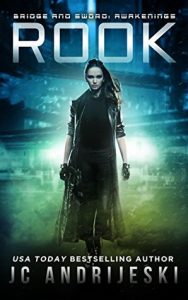 “You are the Bridge…”

Allie Taylor lives in a world populated by seers, a second race discovered on Earth at the beginning of the 20th Century. Psychic, hyper-sexual and enslaved by governments, corporations and wealthy humans, seers are an exotic fascination to Allie, but one she knows she’ll likely never encounter, given how rich you have to be to get near one.

Then a strange man shows up at her work –– then another –– and pretty soon Allie finds herself on the run from the law, labeled a terrorist and in the middle of a race war she didn’t even know existed. Yanked out of her life by the mysterious and uncommunicative Revik, Allie discovers her blood may not be as “human” as she always thought, and the world of seers might not be quite as distant as she always imagined.

When Revik tells her she’s the Bridge, a mystical being meant to usher in the evolution of humanity––or possibly its extinction––Allie must choose between the race that raised her and the one where she might truly belong.

My only problem was that it felt like the characters weren’t connecting as much as I would have liked, and the chemistry between Revik and Allie just felt off. Maybe it was the way they were connecting through their minds that threw me off but the love that I should have been feeling as strongly as they were, wasn’t there. It disconnected me a lot from the love storyline. So it left a lackluster feeling in the end.

If you are looking for a good action book, this is it, but as for the love story it leaves me feeling lukewarm.

One Reply to “Book Review: Rook by JC Andrijeski”