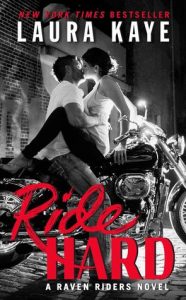 They live and ride by their own rules.

Raven Riders Motorcycle Club President Dare Kenyon rides hard and values loyalty above all else. He’ll do anything to protect the brotherhood of bikers—the only family he’s got—as well as those who can’t defend themselves. So when mistrustful Haven Randall lands on the club’s doorstep scared that she’s being hunted, Dare takes her in, swears to keep her safe, and pushes to learn the secrets overshadowing her pretty smile.

Haven fled from years of abuse at the hands of her criminal father and is suspicious of any man’s promises, including those of the darkly sexy and overwhelmingly intense Ravens’ leader. But as the powerful attraction between them flares to life, Dare pushes her boundaries and tempts her to want things she never thought she could.

The past never dies without a fight, but Dare Kenyon’s never backed down before . . .

Favorite Words:“Just try to remember that those who’ve seen the most ugliness are also most able to recognize beauty. It comes down to trusting yourself as much as other people.”

Why did I wait this long to read about hot bikers? Seriously, I feel like I have been depriving myself. Laura Kaye has opened my eyes to the genre, and I am absolutely going to dive into more of her novels. I may also need to look into other authors who have featured “rough around the edges” biker heroes.

One of the greatest components of this book was the camaraderie between the brothers of the club. They stood up for each other, loved each other, and teased each other. I could see how all of them wanted to do what was right.

I also have to say I love when men defend women who were abused. I think it says a lot about what type of man they are. Dare was the type of man who got angry when he heard stories of women and children being hurt. He got worked up over Haven being abused by her father, and it made me fall a little more in love with him each time. I also loved that Haven was not some gooey cookie. Yes, she loved to bake to clear her head, but she also learned how to be confident in herself, and embrace life.

Cora, Haven’s best friend, was probably one of my favorite characters. Not only was she a great part of the supporting cast, but I also wanted to know what was going on between her and Phoenix. I totally think that Kaye should write a novel just for them because I want to see how they grow as a couple as well.

This book was a fun ride and I can’t wait to read the next book in the series.