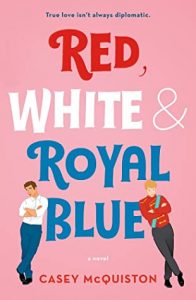 First Son Alex Claremont-Diaz is the closest thing to a prince this side of the Atlantic. With his intrepid sister and the Veep’s genius granddaughter, they’re the White House Trio, a beautiful millennial marketing strategy for his mother, President Ellen Claremont. International socialite duties do have downsides—namely, when photos of a confrontation with his longtime nemesis Prince Henry at a royal wedding leak to the tabloids and threaten American/British relations.

The plan for damage control: staging a fake friendship between the First Son and the Prince. Alex is busy enough handling his mother’s bloodthirsty opponents and his own political ambitions without an uptight royal slowing him down. But beneath Henry’s Prince Charming veneer, there’s a soft-hearted eccentric with a dry sense of humor and more than one ghost haunting him.

As President Claremont kicks off her reelection bid, Alex finds himself hurtling into a secret relationship with Henry that could derail the campaign and upend two nations. And Henry throws everything into question for Alex, an impulsive, charming guy who thought he knew everything: What is worth the sacrifice? How do you do all the good you can do? And, most importantly, how will history remember you?

What can I say about this book that hasn’t already been said? This book was the book that got me out of my reading slump. I read it in TWO DAYS. I couldn’t stop myself from consuming the pages. I was swept up into the world, the alternative universe of the US, and the powers in charge.

I did read that McQuiston wanted to give people a sense of hope. The last election left a lot of us feeling deflated, including her, and she wanted to give readers a brighter reading experience. Alex and Henry certainly gave me a lot of hope, hotness, and fun. I didn’t want to leave their world. I wanted to know more about the cast of characters that made up their friend group. I wanted to go on vacations and experience the parties.

THIS BOOK WAS SO FUN.

What I also loved about this book was that McQuiston wasn’t afraid to touch in issues. Politics whether they are international or within the United States aren’t always pretty. There is a lot of decisions that need to be made and a lot of people they have to go through, and this certainly took a look at it through a different lens. Yes, romantic comedies can be in-depth too. They have their warm and fuzzy moments, but this book was so much more. SO MUCH MORE.

The virtual book club that I take part in read this book and we were all in agreement that there wasn’t one thing that we could say was wrong with the book. We could have probably spent a few more hours discussing all the layers and characters. One thing that we could agree on too was we would love a book with Alex’s sister June and Henry’s sister. WE NEED MORE IN THIS UNIVERSE.

If you are looking for a book to take you away from the real world, this is the one to do it.