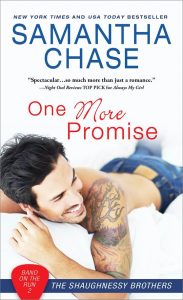 Ambitious Paige Walters is ecstatic when she’s hired to recruit celebrities for a children’s literacy campaign – it’s her chance to prove she’s got the chops to make it in the family business.  She certainly isn’t going to let some fallen idol screw it up.  But as the work brings Paige and Dylan closer together, their attraction grows…and so do their challenges.

Favorite Words: “It was one thing to judge a person when you had all the facts, but it was another to do it when you knew nothing!”

Don’t you love it when a rocker falls in love? This isn’t the usual story of a rocker on the road that finds the woman of his dream. This is the story of a rocker fresh out of rehab looking to turn his life around. It’s about a woman trying to break away from her father’s hold to find herself and find the job that would truly make her happy. Paige and Dylan are both trying to find themselves and are falling in love with one another.

This book had me wanting more from the first chapter. There are ten LONG chapters might I add, but that didn’t stop me. You will become addicted to this one right away. This is yet another fun read that I’m glad I had during the winter freeze.