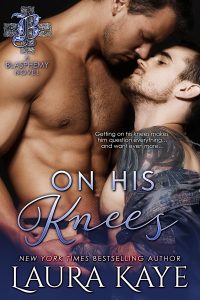 Another failed relationship has lawyer Jamie Fielding confronting the truth—he’ll never be satisfied with any woman until he admits what he needs…to submit and to be used—hard. When a friend invites him to the exclusive Blasphemy club, Jamie is stunned to find everything he ever wanted—in the fierce, ruthless hands of a man.

Psychiatrist Alex McGarry will play with anyone who craves his rough brand of domination, but what he really wants is to settle down. Which makes the submissive male he meets at his club a bad idea—the man might be hot as hell but he’s also new to everything Alex has to offer. Except that doesn’t keep them from coming together again and again, sating every one of their darkest desires.

Master Alex sets Jamie’s whole world on fire and makes him question everything—and that’s good. Because Alex won’t tolerate hiding what they have for long and he wants much more than just having Jamie on his knees…

Favorite Words: “Jesus, the man tasted like sin and sex, like he could ruin him and put him back together again.”

Laura Kaye always manages to suck me into her books with just a few pages. On His Knees is no exception. I loved the connection that Jamie and Alex could form in their days together. These two men needed each other and it was obvious from the first time they met. There were so many moments that made me tear up.

The sex scenes in this book are very intense and beautiful. One of the scenes is a roleplay of a home invader, forcing themselves on the homeowner. Yes, it’s very intense and I will say could trigger a reader. However, all the other scenes are well thought out and passionate. They show the bond that the two have.

This book was such a good love story. It’s about two men discovering what it is they were missing. I will be thinking on this one for a long time.