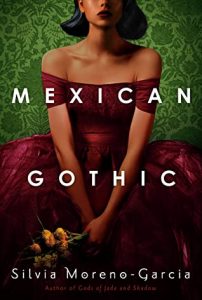 After receiving a frantic letter from her newly-wed cousin begging for someone to save her from a mysterious doom, Noemí Taboada heads to High Place, a distant house in the Mexican countryside. She’s not sure what she will find—her cousin’s husband, a handsome Englishman, is a stranger, and Noemí knows little about the region.

Noemí is also an unlikely rescuer: She’s a glamorous debutante, and her chic gowns and perfect red lipstick are more suited for cocktail parties than amateur sleuthing. But she’s also tough and smart, with an indomitable will, and she is not afraid: Not of her cousin’s new husband, who is both menacing and alluring; not of his father, the ancient patriarch who seems to be fascinated by Noemí; and not even of the house itself, which begins to invade Noemi’s dreams with visions of blood and doom.

Her only ally in this inhospitable abode is the family’s youngest son. Shy and gentle, he seems to want to help Noemí, but might also be hiding dark knowledge of his family’s past. For there are many secrets behind the walls of High Place. The family’s once colossal wealth and faded mining empire kept them from prying eyes, but as Noemí digs deeper she unearths stories of violence and madness.

And Noemí, mesmerized by the terrifying yet seductive world of High Place, may soon find it impossible to ever leave this enigmatic house behind.

This book is magic. Yes, the beginning of it was really slow. REALLY SLOW. However, Gothic novels tend to be that way when there is a story to build. We get little details thrown into the story that seem insignificant now, but later they could mean something more entirely. There was also a lot of character building, which I loved a lot. The characters all felt very real to me. Noemi was very strong as a female character in the 1950’s. I was trying to figure everything out about the creepy house right along with her. There were so many puzzle pieces to the story.

The spooky, creepy factor ran high with this story. Also, there were some scenes that were very disturbing when it came to some gore. I wouldn’t say it was pure body horror or anything, but if you don’t like the idea of open sores, I wouldn’t dive into this one. There was also inklings of sexual assault in this book, so be careful. I wouldn’t want anyone to get triggered.

Mexican Gothic reminded me a lot of a Mexican version of American Horror Story. It just had this total vibe. Also, I think that the author did a wonderful job at making this a very gothic tale. All the things you need for a Gothic feel were there. I had forgotten how much I enjoyed the elements.

What I also wasn’t expecting was a love story. Yes, I said it. There is a bit of romance thrown into this book. Not steamy but a connection is made that I did not expect, but I truly adored.

I think this book is the perfect cold weather read if you are looking for something spooky and worth biting into during the colder months.