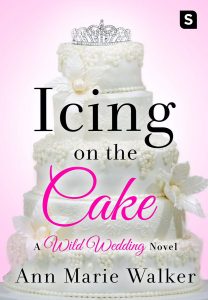 Notting Hill meets The Prince & Me in Icing on the Cake, the second standalone laugh-out-loud romance in Ann Marie Walker’s Wild Wedding series.

Cassandra Miller doesn’t have time for men. She’s far too busy trying to open a cupcake shop with her silent partner and best friend, not to mention catering her brother’s wedding. And let’s face it, it’s not like Prince Charming is going to stroll into the bakery and sweep her off her feet.

Henry has been a prince his entire life but for one wild wedding he wants to be nothing more than an “Average Joe”, or in this instance, “Average Hank”. However, when a case of mistaken identity and a batch of burned cupcakes ends in a night of passion, Cassie and Hank must decide if theirs is a recipe for disaster or the makings of true romance.

This is the second book in Ann Marie Walker’s Wild Wedding series. I was very excited about this one because it had one of my favorite things, a modern-day prince. The inspiration behind Henry aka Hank is of course Prince Harry, and I can totally get behind that any day.

What I love about this book is how much I laughed. There were so many scenes that had me smiling and getting that giddy feeling. My favorite scenes though were during the treasure hunt. Yes, there is a treasure hunt. I won’t give anything away but it’s one of my favorite things in a romance novel so far this year.

Don’t hesitate to pick this one up. It’s the perfect romantic comedy.