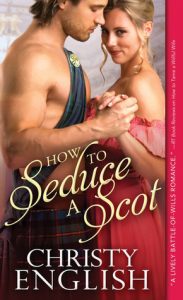 He’s the terror of the ton…

The plan is simple:
1. Descend from the Highlands to face the aggravation of a London Season;
2. Foist his wild sister off on some gullible English lord;
3. Retreat before the ladies of the scandalized ton can get any ideas.

Determined to see his hellion of a sister wed, Highlander Alexander Waters is willing to face anything—even the English. He just didn’t expect his own rough manners to cause such a riot…or for a blooming English rose to catch his eye.

Gently bred Catherine Middlebrook must find a respectable man to marry or her family will be ruined. She won’t allow herself to be distracted by Highland barbarians…no matter how her body may thrill whenever Alex is near.

Catherine wasn’t part of the plan, but as their battle of wills escalates, Alex comes to realize this “proper” English girl is as wild as the Highlands themselves…and nothing will stop him from having her.

Favorite Words: “The terrifying thought of marrying a woman who never listened to him, who scoffed at every word he said save when she was in his arms, did not give him pause. He was a doomed man, and only now did he accept it.”

I love a good historical romance. I especially love when there is a Scot trying to win his lady love. Sadly, there were no kilts in this one but there was some whiskey drinking. It was also slow to start but once it got started the book had a great flow.

Alexander Waters was a good strong male character. He was a bit of a brute at times but a loyal brute. He had principles and truly did try to do what was right by Catherine. It is however difficult when you fall in love with a woman that you know “should” marry an Englishman. It is especially hard too when you pull her into rooms to give her hot kisses against the wall.

Catherine at times was a bit hard to deal with on the page. She frustrated me primarily due to her poor decision making skills, as well as her tendency to keep putting off Alex. There were many moments that I wanted to yell at her, forgetting that she would hear me because she is indeed a book character.

Their love story was one of pushes and pulls but once they got together it was like fire. There was so much passion, and I do love how Catherine has a bit of a kink. It’s nice to see an author giving a female character a bit of a fetish.

This book was definitely fun, and a perfect weekend read.