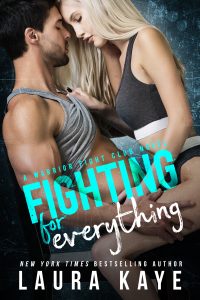 Loving her is the biggest fight of his life…

Home from the Marines, Noah Cortez has a secret he doesn’t want his oldest friend, Kristina Moore, to know. It kills him to push her away, especially when he’s noticing just how sexy and confident she’s become in his absence. But, angry and full of fight, he’s not the same man anymore either. Which is why Warrior Fight Club sounds so good.

Kristina loves teaching, but she wants more out of life. She wants Noah—the boy she’s crushed on and waited for. Except Noah is all man now—in ways both oh so good and troubling, too. Still, she wants who he’s become—every war-hardened inch. And when they finally stop fighting their attraction, it’s everything Kristina never dared hope for.

But Noah is secretly spiraling, and when he lashes out, it threatens what he and Kristina have found. The brotherhood of the fight club helps him confront his demons, but only Noah can convince the woman he loves that he’s finally ready to fight for everything.

Fighting for Everything is one of those books that has stayed with me even days after I finished it. I was on my way back from RT Booklovers’ Convention, I had three plane rides, and all sorts of books. Laura Kaye’s book was sitting on my kindle waiting for me and I couldn’t deny it any longer. Plus it’s the first book in a new series. I always get such a rush when I get a first book in the series. It’s like starting a new adventure.

Noah and Kristina, our main characters, were best friends and from the moment they walked into the room, it was obvious how close they were to one another. Kaye did a wonderful job of portraying a best friend relationship. It was believable and the way they bantered with one another wasn’t awkward or strained.

This book was extremely emotional. It deals with Noah’s battle with PTSD, and the internal struggle he has with his relationships between himself and his family. It really got to me. I felt as I was reading, that I too was feeling him every step of the way. There is a scene where he has to write a list of words about himself. It was the scene that completely broke me. I cried for him. The pain was evident in every word he wrote down and it broke my heart. It’s what made his struggle even more apparent to me.

Kristina was a very good balance when it came to his struggle. She stood up for herself when she needed to, but also took care of him. The best friend to lover was a great way for them to be able to bond in a new way but also keep the honesty. Kristina felt like she could talk to him and be real with him in a way that a new girl coming into a relationship couldn’t. Noah needed the tough love approach to crack into his walls of dealing with PTSD.