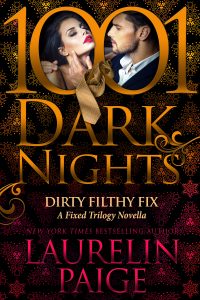 I like sex. Kinky sex. The kinkier the better.

Every day, it’s all I think about as I serve coffee and hand out business agendas to men who have no idea I’m not the prim, proper girl they think I am.

With a day job as the secretary to one of New York’s most powerful men, Hudson Pierce, I have to keep my double life quiet. As long as I do, it’s not a problem.

Enter: Nathan Sinclair. Tall, dark and handsome doesn’t come close to describing how hot he is. And that’s with his clothes on. But after a dirty, filthy rendezvous, I accept that if we ever see each other again, he’ll walk right by my desk on his way to see my boss without recognizing me.

Only, that’s not what happens. Not the first time I see him after the party. Or the next time. Or the time after that. And as much as I try to stop it, my two worlds are crashing into each other, putting my job and my reputation at risk.

And all I can think about is Nathan Sinclair.

All I can think about is getting just one more dirty, filthy fix.

Favorite Words: “I climbed up tentatively and straddled him much the way the dominating man had, but my kiss was gentle, reverent. Pleading. It was a kiss that asked. A kiss that negotiated. A kiss that split the difference between his want and mine, without even saying a word.”

This was a REALLY good one. It was hot and kinky. I loved Nathan and Trish together They had a natural chemistry that was nice and an understanding of one another. I could also get into the fact that Nathan had been an art collector. It said something about his character and also helped set the tone of the story itself.

I couldn’t put this one down. It makes me want to go and read the rest of the Fixed series. Pick this one up if you want something fun to read over the holiday season. It may not have anything to do with Christmas, but it will put a smile on your face.