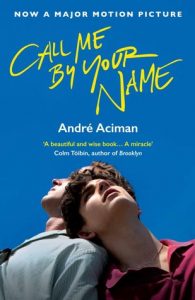 Call Me by Your Name is the story of a sudden and powerful romance that blossoms between an adolescent boy and a summer guest at his parents’ cliff-side mansion on the Italian Riviera. Unprepared for the consequences of their attraction, at first each feigns indifference. But during the restless summer weeks that follow, unrelenting buried currents of obsession and fear, fascination and desire, intensify their passion as they test the charged ground between them. What grows from the depths of their spirits is a romance of scarcely six weeks’ duration and an experience that marks them for a lifetime. For what the two discover on the Riviera and during a sultry evening in Rome is the one thing both already fear they may never truly find again: total intimacy.

The psychological maneuvers that accompany attraction have seldom been more shrewdly captured than in André Aciman’s frank, unsentimental, heartrending elegy to human passion. Call Me by Your Name is clear-eyed, bare-knuckled, and ultimately unforgettable.

How do I begin? There were so many layers to this book. I kept hearing about it and the movie. Everyone loved it or at least I thought so. I called it a book for “literary snobs,” but I think I misjudged it.

I started the book and as I read it slowly. It was immediate. I could tell that there was a beautiful, lyrical quality to the writing. You couldn’t simply skim over the bits that you thought were boring because you would miss something. I soon fell in love with the prose and getting sucked into the story. I wanted to be a part of the town in Italy. I wanted to go to the shops and meet some of the people.

The attraction Elio and Oliver at times swallowed me whole. It was thick and it was gritty. It was hot and it was cold. The intensity of the moments really did get to me and I had to take pause. Sometimes I re-read passages because I wanted to be sure that I was getting them right in my head.

This wasn’t some romantic fling and it wasn’t all seriousness either. Passion can be both mature and immature. It is a roller coaster and this book certainly had that a lot. The end especially had me sobbing like a baby. I would say the last twenty or so pages I could barely read the words because of tears. It is powerful.

Do I think that this book is for everyone? No. I think there will be people who find it extremely boring because it is a lot of people doing everyday things and a lot of internal dialogue. HOWEVER, I think if you are open to experience human emotions and passions, this is a book worth exploring.