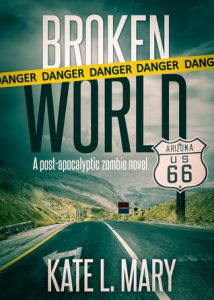 When a deadly virus sweeps the country, Vivian Thomas sets out for California in hopes of seeing the daughter she gave up for adoption. Then her car breaks down and she’s faced with a choice. Give up, or accept a ride from redneck brothers, Angus and Axl. Vivian knows the offer has more to do with her double D’s than kindness, but she’s prepared to do whatever it takes to reach her daughter.

The virus is spreading, and by the time the group makes it to California, most of the population has been wiped out. When the dead start coming back, Vivian and the others realize that no electricity or running water are the least of their concerns. Now Vivian has to figure out how to be a mother under the most frightening circumstances, cope with Angus’s aggressive mood swings, and sort out her growing attraction to his brooding younger brother, Axl.

While searching for a safe place to go, they pick up a pompous billionaire who may be the answer to all their problems. Trusting him means going into the middle of the Mojave Desert and possibly risking their lives, but with the streets overrun and nowhere else to turn, it seems he might be their only chance for survival.

Favorite Words: “The brothers are prepared for anything. They have equipment for camping, hunting, fishing. Pretty much any scenario that might come up. Like it really is the end of the world. It makes me think. Maybe I’m not so bad off with these guys. I don’t have to trust them, or like them, but if I can get them to trust me… These are the kind of people you want on your side when the world goes to hell. These are the kind of people who will survive. Who will do whatever it takes to make it. That’s not such a bad thing.”

I love zombies. My fascination lies in the person’s back story, versus the sheer gruesome appearance of a zombie. Who were they before they became zombies? How did they become zombies? What were their lives like before it all went to hell?

It should be no surprise to you then that I love The Walking Dead and even Fear the Walking Dead. The character-driven stories are always what makes a zombie film, show, or book work for me.

So when I met Kate L. Mary at the RT Booklovers Convention and we got to talking, I knew I liked her right away when she mentioned that she’d written a zombie book. She hasn’t written just one book, rather a whole zombie series. And well, she loves The Walking Dead, especially Daryl Dixon. I mean seriously, who doesn’t like Daryl Dixon? I was intrigued because I have always wondered how a romance writer could shift from the romance genre to the zombie apocalypse genre?

Kate L. Mary did it SO well. I was addicted after the first chapter of Broken World. I spent the next three days trying to devour every last word and page of this book. I felt like I was in the world that she was describing. I want them to survive. The group is becoming a family slowly but surely. You aren’t exactly sure who to trust and you just hope that none of the characters you love will be a zombie snack.

There is so much heart put into this book. People that you never imagined coming together, are finding ways to exist and care for one another. In the world we live in right now, I think a book like this is something to think about. Perhaps it’s a way to analyze yourself. What would you do if you were put into this situation? Who would you be?

I seriously can’t wait to dive into the next book in the series. It’s on my Kindle waiting for me as we speak.

(However, I will say that if you aren’t crazy about violence and gore then you may want to stay away from this one. I do think though that knowing it is a zombie novel should be self-explanatory.)