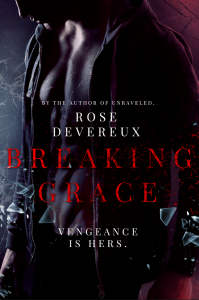 Two years ago, I murdered the love of Grace Garrett’s life.

I had it all – a thriving company, money, women at my beck and call. Then I shot and killed James Winthrop. And got away with it.

His beautiful fiancé is ruined, so damaged she’s destroying herself.  And I’m the reason why.

Nothing and nobody can save her. Except me. Only I know how to help her start again. By wiping the slate clean. Breaking her down until she’s brand new. And rewarding her obedience with the one thing she truly needs. Vengeance against me.

I have been sitting here pondering what to write. This book had me feeling a lot of things as I read it. I admit that I wasn’t comfortable in a lot of places. The idea of a woman being kidnapped and then making a deal with the capturer to be his sex slave baffled me. It was a bit dark, especially seeing as she had a past of being sexually assaulted. Why would she put herself through that again?

This book to me was a fairytale version of Stockholm Syndrome. I know that it went deeper in some aspects of Grace and Bram’s characters but I just couldn’t shake the discomfort. I wanted to be happy for her. I did. I just kept wondering if Grace was ever going to go to therapy and talk about the issues. There could easily be a whole book on that alone.