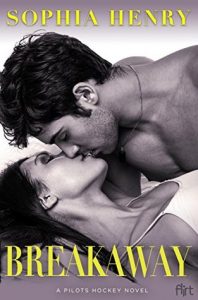 In a standalone hockey romance that tugs at readers’ heartstrings, a broken ex-pro learns to live and love again—all thanks to the complicated, wonderful nurse who gives him a second chance.

Brianna Collins needs to break away from her overbearing family. Her parents expect her to “fix” her brother after a series of concussions derailed his hockey career. Unfortunately, no doctor will give him clearance to play, and she’s finished with being the person they rely on to perform a miracle that will never happen. For Bree, a six-month nursing assignment at a hospital in Charlotte, North Carolina, is the perfect escape.

Luke Daniels, former forward for the NHL’s Charlotte Aviators, has spent close to a year rehabbing a career-threatening injury—and distracting himself however he can. Worlds collide when Luke realizes that the girl from his latest one-night-stand happens to be the new nurse at the hospital where he volunteers in the pediatric unit. What’s more, Bree’s the only person who makes him excited about life again.

Despite her initial reservations, Luke can’t help pursuing sweet, beautiful Bree. Then he realizes it was her brother whose career he ended with an accidental hit, and he falls back on the thing that’s always helped suppress his demons: alcohol. But if Luke doesn’t kick his old habits, he just may lose the one thing he loves more than hockey.

This was simply a good book. It wasn’t my favorite and it didn’t leave me wanting. I enjoyed the banter between Bree and Luke, making me laugh a few times. The story flowed moderately but I didn’t think that whole injury ‘thing’ was a real problem for their relationship. It seemed to be dropped pretty easily. I thought it would plague Luke a bit more, however it just fizzled. The chemistry between Bree and Luke was lukewarm to me (ha-ha puns). I wanted more from this book. Happily Ever After or not, it didn’t feel like a goal.