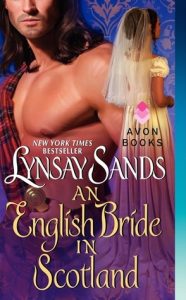 Annabel was about to take the veil to become a nun when her mother suddenly arrives at the Abbey to take her home… so that she can marry the Scottish laird who is betrothed to her runaway sister! She knows nothing about being a wife, nothing about how to run a household, and definitely nothing about the marriage bed! But from the moment Ross MacKay sets eyes on Annabel, he is taken with his shy sweet bride… and the fact that she’s blessed with lush curves only makes him utter his own prayers of thanks. But when an enemy endangers her life, he’ll move the Highlands themselves to save her. For though Annabel’s not the bride he planned for, she’s the only woman he desires…

Favorite Words: “In sleep, Ross’s face was unguarded, his expression soft. It made him appear much younger. He also snored loud enough to wake the dead. It made her think it would be a good thing did she fall asleep first every night for the rest of their marriage.”

One of the first kind of romances I fell in love with were historical romances. Scottish men are my favorite. There is nothing like a Scottish rogue to make me fall in love.

Ross was a Scottish laird, but he was perfection. I loved how he was a fair man, and he loved everything about his curvy bride. He also had the love of his men which was very important for that time. You could tell a man was good by the kind of men who followed him.

Annabel was certainly not a whiny heroine. I appreciated that and I identified with her on certain things, like not being able to fit into a dress properly unless it was big enough to fit the bust-line (big breasted women unite!). She also was guarded and not willing to show her feelings right away, even though they were building every day for the man she barely knew.

I loved their love story and I know that I will be reading the next in the series for sure.