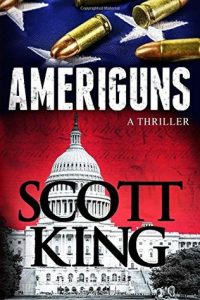 What’s the story – from Goodreads:

Lone-Wolf Gunmen Terrorize the Nation’s Capital! After surviving a mass shooting, FBI Agent Nathaniel Ryder is forced to confront his worst fears as AMERIGUNS, a group of lone-wolf gunmen, put Washington D.C. under siege. When Ryder’s superiors suspect him of orchestrating the terror, he must go on the run, unable to trust his co-workers or friends. Only he can clear his name and put an end to the killings.

Favorite words: “All humans have the capacity to do good and evil. It’s how God made us. But the tendency to rage, be violent, and to act upon that evil, that is a choice. I have to think then that for all the evil choices being made, there are good ones being made too.”

I would not pick this book up normally. However, I am really glad I took a chance when the blog tour opportunity came into my inbox.

The story moves at a quick pace and keeps your attention. There is plenty of action and a great cast of characters. Nathaniel Ryder is funny and smart. You root for him the whole time.

Is there a romance element? No, but honestly I think it would take away from the drama of this great thriller. It’s a great book to sit down with if you’re in the mood for a puzzle.